Finding quality Arabic resources for English-speaking learners is not an easy task. This becomes especially problematic considering that there are even fewer resources available for learning dialects, and finding a class to learn spoken Arabic outside of the country where it is spoken is nearly impossible. Arabic classes seem to be primarily organized either for Muslim children learning to read the Quran or they are available at some universities where the focus is on MSA only.

On my trip to Cairo, I was able to get some language learning books for both MSA and ECA (Egyptian Colloquial Arabic) and I will review them as I finish each book. The first book I will review comes from the Kallimni 'Arabi series by Samia Louis, which is called Kallimni 'Arabi Bishweesh: A Beginners’ Course in Spoken Egyptian Arabic 1 (ISBN 9789774162206) published by the American University in Cairo Press in 2008. It is a paperback book, 17 x 24cm, has 268 pages, has several illustrations and it includes an audio CD. It has no Kindle or other e-book editions. The listed price is $29.95 but the book may be obtained for less if you are in Egypt due to the value of the Egyptian Pound being reduced by almost 50% against the US Dollar after it has been allowed to float freely. Sorry, Egypt <3. 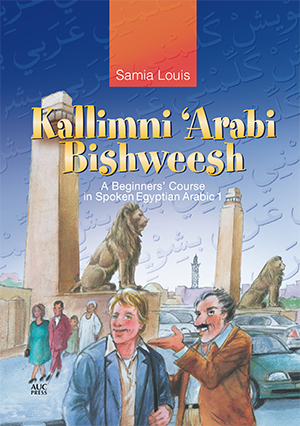 The book is organized in 10 modules as follows:

Everything is written in Arabic with the exception of the sections at the end of each unit where all the dialogues are transliterated. There is a glossary organized the end of the book and it is organized by unit. Since the book is written in Arabic including the directions for each exercise, it assumes that the learner is already familiar with the Arabic alphabet. Throughout the book, there are listening exercises to get the students to listen to the pronunciation of the letters in the alphabet as well. At the end of Unit 5, there is a cumulative review which is a nice addition. It is obviously meant for classroom use (or with a teacher privately). For students who have already studied MSA before starting learning the dialect, this book will be a breeze. I'm not sure how someone totally new to Arabic would feel about this, but I believe that accessing materials actually written in Arabic should be done immediately, rather than relying on transliterated books and exercises.

The book seemed simple enough and easy to follow. It didn't overwhelm with too much vocabulary and overall it was well organized. Each module has a vocabulary list at the very beginning that you will need for the lesson, so this is great if you are adding vocabulary to your flashcard set. The recordings are nice and have a short and pleasant oud music at the beginning of each audio file. Some people I talked to have found this rather annoying, I liked it.

It was nice that proper names were italicized so that some students not familiar with Arabic names don't mistake the names for another word.

The book doesn't have detailed grammar and I like that it doesn't focus on presenting the language through excessive grammatical rules or descriptions like the Kullu Tamam. There are several exercises to allow the students to practice the language with their peers or with your tutor or teacher.

As someone who is already familiar with MSA, I enjoyed going through this book and making mental notes about the differences between MSA and ECA. Learners often ask which they should learn first, MSA or a dialect, and this book has convinced me that learning MSA will making ECA learning so much easier.  So go ahead, pick up your MSA books ladies and gentlemen and then once you get to an intermediate level of MSA, give masry some serious love. I found this to be a good approach so I don't confuse the two.

In need of attention and improvement

Egyptians are notorious for either not knowing or not caring about the difference between certain letters of the alphabet and in many occasions they use them interchangeably. For example, they use ي and ى interchangeably even though one is the long vowel yaa and the other is the alif maksoora. They also use ة and ه in the same way. Since they pronounce ز and ذ identically, you will see them used as if they were the same thing since there are no standardized dialect writing rules.

In this book, ي and ى  and ة and ه have been used as if they were the same thing. This is particularly frustrating for the beginning learner because the author didn't pick one and stick with it, it seems to be used randomly. The book offers no explanation so we can assume that they probably made an effort, but since this convention is used so much, the editor didn't even register it on his or her radar and neither did anyone else on the list of people credited with reviewing and helping with the book. There are several of these lazy mistakes in the book and I think they should be harmonized in future editions. Someone without any knowledge of MSA would read many of these words and learn them incorrectly if they are studying independently. I am fully aware that using these letters in such a way doesn't prevent Egyptians from understanding each other. However for learners, especially at the beginner level, this should be made clear, and they should be consistent throughout the book.

For example, نادي صحي is sometimes written as نادى صحى and there are several other examples in the book where this happens, like تاني and تانى and others. This can be especially confusing if verbs in ECA follow the same logic as verbs in MSA (haven't gotten to that level in ECA yet), where the verb changes occur such as مَشَى and تمشي. This will get confusing very quickly if it's not consistent and those of us who really love Arabic and take it seriously don't want to learn it incorrectly. Also, when a book contains several errors like this, a pedantic learner will lose some confidence in the quality and accuracy of the book.

(This mistake is also present in MSA in the Lughatuna al Fusha book 2 by Samia Louis where there are errors such as مستشفى being written as مستشفي or هي being written as هى. I find this especially irresponsible when it comes to an MSA book since there are clear rules and they should be treated carefully to ensure accuracy. I will review these books at a later time. It is because I found the same errors in both the ECA and MSA books by the same author, I am lead to believe that at least one of the editors doesn't know or doesn't care about the difference in the letters, and this carelessness should not be tolerated in language learning books.)

Another thing that should be improved in future editions is the separation of the vocative particle يا from the name which follows it. A more experienced learner will be able to clearly tell what it is, but a beginner may assume that it is a word beginning with يا rather than a name or an honorific after it.

Numbers 11 - 20 were given in the book and on the audio tracks, but were not spelled out. I got some help online for the spelling of the numbers, so this wasn't such a big deal but it would have been nice to have. No rules for the use of numbers were explained, so I am not sure if numbers in ECA follow the same complicated logic as they do in MSA, but maybe this was left for higher levels, we will see.

And lastly. I would like to invite the authors to freely include Egyptian culture in all its glory in the book since learning languages also means learning about the culture of the people who speak it. For example, there is a dialogue in which a man calls a place called Hamburger King and orders hamburgers with ketchup and mustard. While I understand that this book is geared towards English speakers, I think this dialogue could have been an opportunity to present the names of some Egyptian dishes. I surely wouldn't go to Egypt to order a hamburger, and I personally love any opportunity to learn about culture as I learn a language. But again, this is not a big deal, but it would be nice to have.

Despite my annoyance with the use of the above-mentioned letters in an inconsistent and unsystematic way, I like this book overall and I would still recommend it for anyone trying to learn some basic ECA. The language is useful and nicely presented. The book is simple to follow, there is plenty of space in the book to write notes about the material learned, and the language learned is useful in daily situations. As you can see by the book organization, it is something you would typically find in a language book at this level. I am looking forward to starting the next book in the Kallimni 'Arabi series, and I will review it later this year when I finish it.
Like with any language you are learning, it will not come from a textbook alone so I suggest using additional resources such as the Egyptian dictionary or watching Youtube channels in the Egyptian dialect.

If you are learning Egyptian Arabic and know of good resources to learn it, please let me know in the comments.

PS, I am not paid for any of the links here.